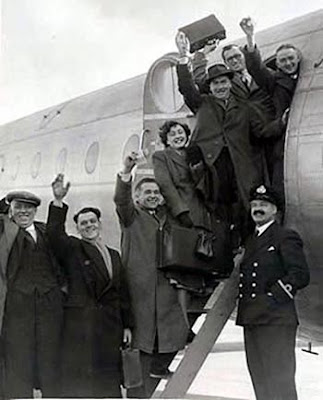 At 15:03 on Sunday March 12th 1950 Avro 689 Tudor 5 G-AKBY c/n 1417 approached runway 28 at Llandow. The aircraft was returning rugby fans from the Ireland v Wales international that had taken place the previous day in Dublin where Wales had won the Triple Crown Trophy. At 15:05 the aircraft named “Star Girl” hit the ground approximately half a mile short of the runway in a field at Cross Farm Sigingstone where a group of local lads were playing football.

The aircraft was operated by Fairflight Ltd and was carrying 75 passenegers which included members of Abercarn and Llanharan Rugby Clubs plus 5 crew members. At the time of the crash the weather was reported to be fine and clear with light winds.

Eye-witnesses state that at 15:03 the Avro Tudor was approaching the runway at Llandow aerodrome at an abnormally low altitude with the undercarriage down. The pilot attempted to correct the descent by increasing the power of the engines and brought the nose up. At first the ascent was steady, but the nose continued to lift until it was near vertical, and then the engines stalled.


Two passengers walked away from the wreckage unaided, and a third man although badly injured survived. Eight more survivors of the initial impact would die later in hospital of their injuries.


Much speculation was made regarding the cause of the crash one suggesting it had been a shift in the centre of gravity of the aircraft when passengers baggage moved in the hold during the final approach. After the eight day tribunal the official verdict was recorded as “Cause Unknown”.

At the time this was the Worlds worst air disaster and some say the reason why Llandow was never further developed to become the main passenger airport to serve the public of South Wales.

One of the first medically trained people to arrive on scene was my Aunt Kate who lived locally and was a nurse serving in the RAF. A memorial stone that she unveiled years later can be found in Sigingstone Village.

The aircraft originally built as an Avro Tudor 2 (c/n 1417) was initially destined to enter service with the RAF as TS903 but this serial was never taken up and it was registered on the civil register as G-AKBY 16th August 1947. The aircraft was used extensively during the Berlin Airlift prior to the fateful day in March 1950 when it was destroyed beyond repair and struck off charge. A photograph of KBY at Berlin-Gatow in 1949 can be found by clicking HERE.
More information on the Police response to the incident can be found at the following link http://www.south-wales.police.uk/fe/master.asp?n1=8
I would like to hear from anyone who can add any personal experience of this tragic event. Please contact me at iangrinter@btinternet.com
I have received the following from Mr Mark Maunder
"one of the surviving passengers was Mr Gwyn Anthony of Llanelli.
He was a teacher at Llanelli Boys Grammar School when I attended there in the 1970's and he taught Biology. I am not sure whether he is still alive now but he was a very gentle man and never needed to shout at any of the more unruly pupils.
I do remember him telling me once that he survived with another gentleman who was sat beside him, he believed it was because the seats in which they were sitiing had been added in as the aircraft was fully booked. The extra seats had been bolted to the floor of the aircraft and he recalls the majority of other seats just basically breaking away from their fixings during the impact.
He showed me his thumb nail which was a very odd ridged effect and he said that thatwas the only injury he sustained and that it had never grown normally since that time" ..regards Mark Maunder.
IanG (thanks to the South Wales Police Museum for the photographs)
Posted by Ian G at 7:09 AM